A project that will engage young Yazidis, and provide them with the relevant training to support them to engage with, record and share their cultural heritage. 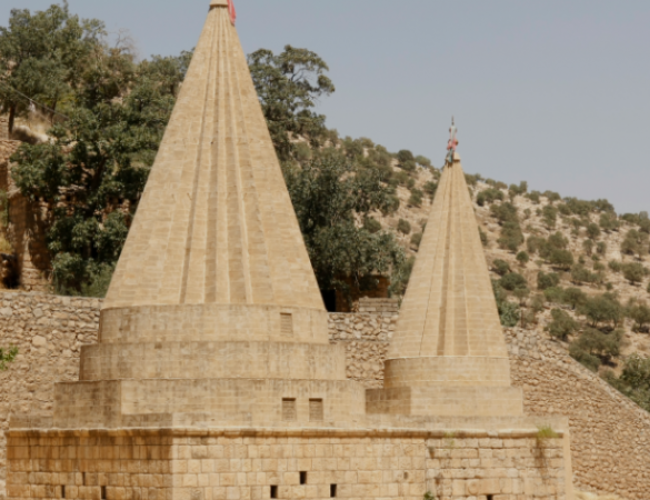 The erasing of Yazidi heritage

Historic shrines are an important part of Yazidi identity, which is defined by distinctive ritual practices, observed and shared at these sites. Memories, oral histories and understanding of shrines are considered vitally important by local people, and provide a focus for the construction of community cohesion, particularly on visits during holy days and festivals.

It has been reported that at least 20 historic Yazidi places of worship around Dohuk, Mosul and Sinjar, have been destroyed between 2014-2016, especially in the cites of Ba'shiqa and Bahzany. In addition to this, there has been mass displacement of several thousand Yazidis and the connection with and use of these historic shrines has been massively disrupted. With the ethnic cleansing and enslavement of the Yazidi population, there is considerable risk that their cultural identity and the memories and practices central to their culture will disappear.

In this project, 15 displaced young Yazidis will be recruited and trained in documentation techniques to record Yazidi memories and experiences associated with the use of shrines and heritage sites, such as festivals, pilgrimages, rituals and other social practices. The project will specifically focus on 30 Yazidi historic shrines around Dohuk, Mosul and Sinjar in Iraq, especially the cities of Ba’shiqa and Bahzany.

The young Yazidis will work with the University of Liverpool, along with Khak TV and the Directorate of Antiquities of Sulaymaniyah, to make ten documentaries covering the historic and cultural uses of the shrines. The resulting films will be distributed through six TV channels in the region and shown at a public documentary film festival which will bring together individuals from the Yazidi community, government agencies and heritage specialists and academics to discuss future preservation of Yazidi heritage.