This project will collect, archive and share the traditional skills and living memory of the Bedouins of Bekaa in Lebanon. The Bedouin are a group of nomadic peoples who have historically inhabited areas of the Levant, North Africa and the Arabian Peninsula. 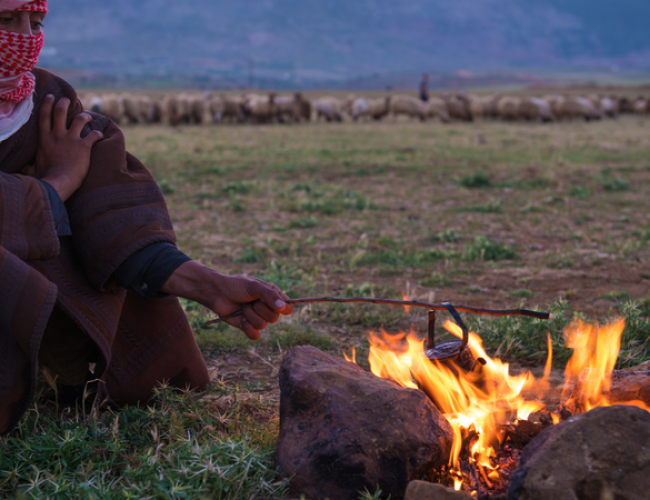 The heritage of the Bedouin of Bekaa is at risk from conflict and from distractive socio-political consequences, particularly across the Lebanese-Syrian border.

These nomadic groups have been moving across the border region since the 13th century. However, the French Mandate (1920-1943) marked the beginning of the end of their traditional lifestyle: national borders were erected, lands were enclosed, Bedouin were cut off from their brethren in Syria and their relationship with the land was severely transformed. Fertile grazing lands that were previously managed by the tribes passed to the state and private landowners. In modern Lebanon, there is no place for nomads. The government forcefully requires them to become sedentary but provides little or nothing in the way of services like education, healthcare and sanitation. Their villages are not recognised and often do not exist on official maps.

Conflict has made movement across the border difficult for several generations – civil unrest (1958), the Lebanese Civil War (1975-1989), Syria’s military presence in Lebanon (1976-2005), the phase of the so-called Pax Syriana licensed by the Taif Agreement (1989) and the current war in Syria. It is currently not possible for the Bedouin to reinstate their historical routes and reconnect with lands, villages and people on the other side. Bedouin communities have suffered as, without freedom of movement, they have been losing an integral part of their heritage and way of life.

The project will work with the local Bedouin, to enable them to enhance and safeguard their living memory of transhumance, use this heritage for sustainable development and promote it, and the associated transhumance routes, as future cross-border Cultural Corridors of Peace.

The project aims to:

The project will achieve this by meeting through a range of activities that include:

​a) Digital documentation of the nomadic trails of the Bedouins of Bekaa across the border with Syria, based on participatory mapping exercises;

d) Development of a virtual exhibition based on a narrative co-developed with Bedouin communities about their living heritage ;

a. Recruitment and training of at least 30 people in cultural documentation (photography, video, audio and text);

b. Development and facilitation of practical skills workshops led by and with the Bedouin so that young generations can become familiar with their nomadic pastoral heritage.

a. Development of the Cultural Corridors of Peace web platform, a user-friendly tool for public awareness, which will host the Open Access Archive and the virtual exhibition;

b. Development and promotion of a Mobile Application for connecting the Bedouin across the Arab world (focus on the Levant and Mesopotamia) and for crowdsourcing information that will be included in the Open Access Archive;

c. Initiation of the necessary procedures for inscription of the Intangible Cultural Heritage of the Bedouin of Bekaa on the UNESCO Lists and of selection of Best Safeguarding Practices;

d. Development of an Action Plan for the promotion and safeguarding of the Bedouin culture as a living heritage of peace.