Rescuing the Mamluk Minbars of Cairo

This year-long project focusses on the research, documentation and conservation of Mamluk minbars in Historic Cairo. 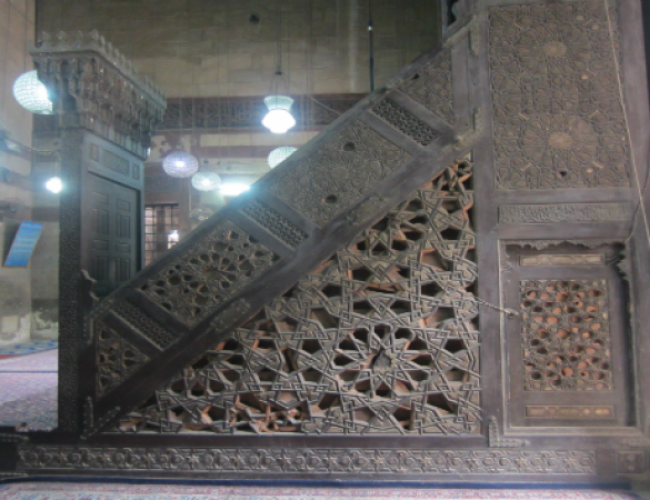 Mamluk Minbars are stepped pulpits, made in the period from 1250 to 1517. Found in mosques, they are traditionally used by imams to deliver sermons and lectures. Minbars are ornate examples of Islamic art and architecture. Generally made from wood, they are adorned and densely decorated with complex geometrical patterns and calligraphic texts, typically made with ivory, ebony and camel bone inlay.

Islamic monuments are under threat of looting and destruction across the Arab world. Since 2011, there has been an increase in the number of monuments which have been stolen in Egypt. Minbars are particularly at risk due to the high market value of the intricate carved elements, and the lack of detailed documentation of these portable items.

In this project, research will be conducted on Cairo’s minbars, and a new comprehensive database will be created which can be used to aid future restoration. During the research phase, the condition of the minbars will be assessed, and a priority list of four minbars will be produced for subsequent conservation work to be carried out.

The restored minbars will be studied in depth by local craftsmen, examining how their complex patterns are constructed, to encourage understanding and appreciation of traditional arts and crafts in the area. The local craftsmen will go on to design a number of new prototypes inspired by the geometry of minbars, which will then be sold in the local market. A series of thematic workshops and training sessions will be delivered for local professionals, volunteers, teachers and children.