Back to search
Centre for Cultural Heritage Preservation (CCHP)

Since its establishment in 2001, the Centre for Cultural Heritage Preservation (CCHP) has been privileged to lead the way in preserving tangible and intangible cultural heritage resources, and targeting towns and villages in Bethlehem governorate in efforts to link the past with the present and safeguard our heritage as a manifestation of Palestinian culture, history and identity.

CCHP has succeeded in renovating 75 traditional buildings and 25 urban and infrastructure projects throughout towns and villages in Palestine. These projects created short term employment of over 150,000 working days and provided over 180 long term job opportunities.

To complement these efforts, CCHP implements awareness-raising campaigns to draw attention to the importance of cultural heritage preservation for the future of Palestinian society. CCHP also formulates conservation plans for towns and villages and conducts research and studies on cultural heritage and its role in
sustainable development. CCHP played a fundamental role in the preparation of the Nomination Dossiers for inscribing Bethlehem and Battir on the UNESCO World Heritage List. 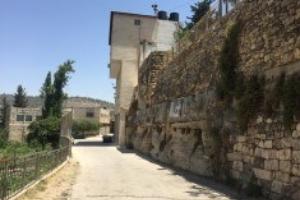 Cultural and Natural Heritage: A Tool for Socio-Economic Development

This project rehabilitated an ancient spring and its associated square, part of the Palestinian World Heritage Site ‘Land of Olives and Vines’.