Back to search
Bogd Khaan Palace Museum of Mongolia

The Bogd Khaan Palace Museum Complex, formerly known as the Green Palace, was built between 1893-1903 and served as an official residence of Mongolia’s Theocratic Ruler, the Bogd Khaan up until his death in 1924, and was from where he reigned over the country and conducted affairs of state and religion. 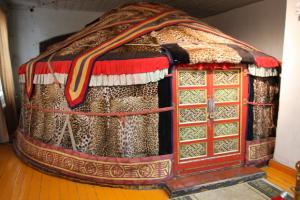 The Leopard Skin Ger was a personal belonging of the last King of Mongolia. This project includes the conservation of the ger's interior and exterior, including the outer leop…