Back to news & events
Stolen Afghan manuscripts have been coming up for sale at major auction houses, according to research group

Historians in Qatar say they have intervened to stop the international sale of nearly a dozen stolen manuscripts from Afghanistan. The historians are part of the Himaya project, a joint effort between Qatar National Library and the International Federation of Library Associations and Institutions (IFLA), working to stop illegal trafficking of manuscripts in the Middle East, North Africa and Central Asia.

Working with Interpol, the World Customs Organization and a team based at National Library in Doha (home to more than 3,500 important Islamic manuscripts dating from the 3rd to 20th centuries), the Himaya network identified several manuscripts for sale at major international auction houses, which had been stolen between 2016 and 2019.

“In 2020 we discovered via our international team of experts that some important Qur’anic manuscripts from Kabul were for sale in Paris, London, Amsterdam and Iran,” says Stephane Ipert, the National Library’s director of special collections. “Our attention was drawn by a nice manuscript, a rare and beautiful Qur’an, on sale at Sotheby’s London, described as ‘A magnificent and highly rare, illuminated Qur’an juz’.”

Ipert explains that the Qur’an was identified by Francis Richard, a preeminent scholar of Persian manuscripts who alerted him to the Sotheby’s sale item after having seen and catalogued it in 2016 at the National Archive of Afghanistan in Kabul.

“Now we are trying to obtain the restitution of that manuscript to Kabul,” Ipert says.

But this is easier said than done. The theft was never declared by the National Archive and the actual numbers of stolen manuscripts are unknown. According to Ipert they were taken from a precious collection of more than 6,000 Timurid era Qur’ans with special decorative elements.

While Sotheby’s removed the manuscript from its auction last year, after pressure from Himaya, Ipert says that other pieces from the collection have been reappearing at auction houses around the world. His team found one at a Dutch auction house last May but it was sold before they could stop it, as was another advertised on a social media site in Iran. They found eight other stoeln manuscripts in the past year. These included one discovered via an online post from people associated with the former Afghan government, advertising an ancient Qur’an for sale for more than a million dollars.

As Qatar becomes a hub for Afghan cultural exiles and a meeting point for Western and Taliban officials, the National Library has become a centre for soft diplomacy aimed at protecting Afghan heritage. Last month they hosted an international meeting of experts to discuss strategies for protecting heritage not only in Afghanistan but in other failed states like Libya and Iraq, where political vacuums, corruption and poverty conspire to make fertile breeding grounds for illegal trafficking.

In June and July, Taliban officials, including the deputy minister of culture Mawlawi Atiqullah Azizi, met with Ipert to discuss ways of protecting manuscripts. The result of these meetings is the development of a new online programme in Dari and Pashtu to train law enforcement officials in the awareness and risks of trafficking. It is due to be implemented this December in collaboration with Arch International, a US charity. Arch will also work with the library on a training programme for interns from the National Archive in Kabul.

The National Library’s next collaboration is with the Athar Project (Antiquities Trafficking and Heritage Anthropology Research) to track and monitor illegal trafficking of manuscripts on social media sites such as Facebook and Tiktok.

Ipert says there is a desperate need for cataloguing and digitising inventory at Kabul’s National Archive and other important institutions in Afghanistan. But he is encouraged by the Taliban’s recent change of stance regarding heritage protection, which he says is mainly due to their need to work with the international community. In marked contrast to the Taliban’s destruction of the Buddhas of Bamiyan in 2001, he says that in recent meetings with the deputy minister of culture, “he was very interested in preservation of national heritage”.

“We try to use our good relationship with everyone to protect Afghan patrimony” Ipert says. “Whatever the political situation is, we still need to save the heritage.” 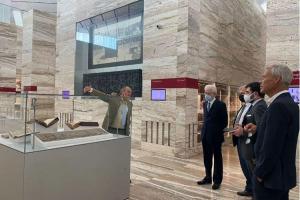 Get in touch to enquire about listing your own news, events or announcements here; using the contact button below.